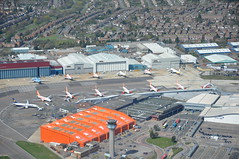 Luton Airport is 35 miles north of central London and is accessible by train and coach. It has a single terminal, and the majority of its scheduled flights are budget airlines serving Europe.

The bus service from Luton Airport Parkway station takes about 8 minutes, and runs every 10 minutes from 5am to midnight, using air-conditioned bendy buses. The service costs £1, unless you have a through ticket to Luton Airport Terminal (ask for this explicitly, as ticket offices interpret Luton Airport as Luton Airport Parkway). Given that the fastest train from St Pancras takes 20 minutes, total journey time can be less than Stansted's 46 minutes.

However the train from London, with bus connection, cost over £20 in 2015, the same as secretlondon's return flight. A green line coach from Brent Cross to Luton was only £8 return with a student card, although Easybus might be cheaper still if you book in advance.

However, a visit at 5:30pm on a Wednesday discovered that the full length of Airport Way was a moving traffic jam to leave it, sometimes backing up round the main roundabout delaying access, and back behind the exit barriers for the short stay car park (although there were staff stationed at the barriers to deal with any problems this caused). It took 10 minutes to traverse Airport Way, and the jam then turned left towards the station, so it's unclear how much more delay it would add to the transfer time. This may be due to current roadworks on the A505, as Nick's previous return trip was at the same time, and not unduly delayed.

The departure terminal is nothing special, with the usual mix of cafe-bars and shops - Guinness cost £3.10 a "pint" (probably 1/6th head), and a pastrami cheese sauerkraut bagel £3.75. What was notable was that between every retail unit there is a mains socket pair. Unfortunately these aren't near the seating units, so to use them one would have to sit on the floor against the wall, with one's legs sticking out into the (wide) walking area, so no concealing the activity.

secretlondon considers airport food and drink to be extortionate and in 2015 had a meal deal from Boots which was nearly normal prices.

On a weekday morning in May 2008, 14 of the 70 check-in desks were in use, and only one of the five departure gates in the cluster, giving the airport a spacious, stress-free feeling. However, on a Wednesday at 5:30pm in June, the airport was about twice as busy, and Nick suspects that in high season it's not going to be anywhere near as fun.