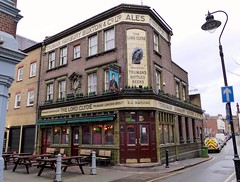 A beautifully-tiled pub between Southwark Station and Borough Station.

It's owned by the EI Group (formerly Enterprise Inns). According to a thread on the London-SE1 forum, as of January 2020 the family that had run it since the 1950s have now moved on. The pub will be transferred to the EI Group's managed division, the Bermondsey Pub Company.

We haven't visited since the change of management, and so some of the details below may be out of date.

The pub serves a not very exciting but large range of beers from five or six handpulls. On bob's 2008 visit, these were London Pride, Young's Bitter, Adnam's Bitter, Greene King IPA and Spitfire, with many still there on Ewan's 2012 visit (along with Hog's Back TEA). All of the beers are drinkable, and the landlords are quite friendly and chatty people.

There is a quieter room round the back with a fireplace and a small hatch looking through to the bar, where the staff will serve you (if they spot you). When the pub is really busy, such as on a Friday night outside summer, this room can get quite noisy.

Food is English pub basics, such as thick doorstop sandwiches (their salt beef is excellent), and is served 11am-2:30pm and 5:30pm-11pm from Monday to Friday. No food is served during the weekends.

The Time Out review of this place says that it's on a street “so small that the compilers of some London maps haven't attempted to mark its name”.