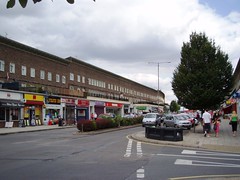 A small town just outside Loughton, near the eastern end of the Central Line, in postal district IG10. It is just off junction 5 of the M11.

The main shopping street is The Broadway, at the western end of which sits the Sir Winston Churchill pub. The shopping street includes a Sainsbury's, and is generally less wealthy than the Central Line stops to its immediate west.

Auto-generated list of things in Debden (view them on a map):