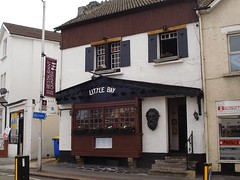 Elvum visited on a Saturday night in October 2008. With a full restaurant, service faltered once or twice — we had to ask for menus, and it was a little effort attracting the attention of waiting staff despite our strategic location right next to the till. We weren't kept waiting unduly for food though, and the staff were friendly and helpful when collared.

The food was all good, and sometimes excellent. Bread for example was yeasty with a good crumb, but a rather soft crust — like high quality supermarket bakery bread. It and the accompanying butter were free, which was undeniably in its favour. A starter of honey-roast pork belly with black pudding, apple and parsnip purée (£3.25) was tasty, let down only by a thin slice of rather dry black pudding. Pork terrine with fig purée and toast (£3) was also very good — except for the merely adequate toast, which appeared to be Mother's Pride, or similar.

For main courses we had rump of lamb with potato gratin (£9.75) and braised beef with mashed potato and caramelised vegetables (£8). The beef was excellent — a generous serving of tender beefs, buttery mash and vegetables lightly roasted yet still al dente. The lamb was also good, but no choice of rareness was offered — the slices that arrived varied from medium-rare to medium-well. We eagerly ordered desserts (both at £3) and two glasses of dessert wine (£4 a glass) — an apple cake with custard and ice-cream (the culinary equivalent of two clowns at your birthday party, perhaps?) was delicious and a chocolate browny (sic) with ice-cream and chocolate sauce more than adequate, if a little dry.

We shared a bottle of Cape Crown Pinotage 2007 with our meal, which at £16.95 we would unhesitatingly recommend to lovers of fruity reds.

Other reviews of Little Bay restaurants have characterised them as offering stupendous value for money, and this one will not offer a dissenting opinion. The food on offer would be good value at half as much again. Courses from the printed menu are fixed in price (eg all main courses cost £5.25 before 7pm and £6.85 afterwards) at levels barely above the RGL threshold for Category Cheap Food, for food well above average in quality. It demands a comparison with Malcolm John's (now sadly closed) Le Cassoulet, 50m up the road: the latter offered top quality French bistro cooking, served and priced accordingly; Little Bay is the cheaper, funkier cousin, with food that demands attention if not respect.

Accessibility: Entrance from the main street is up several steps, but there is an accessible toilet, so there may be level access via another door.