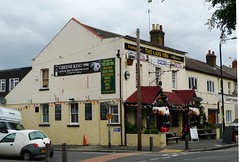 The Lion Inn was a pub on the border of Croydon and Thornton Heath. It has now closed. As of late 2021 it's overgrown with greenery photo and has clearly not been open for quite some time.

Pub just on the border of Croydon and Thornton Heath.

It's an old-fashioned backstreet pub, with several different areas inside. Entry is into a small front bar with a sofa, a couple of armchairs, and a coffee table as well as a short stretch of bar with five handpumps. Through a pair of double doors from here, the main part of the bar, lined with bar stools, leads back past more seating to an open area at the back. This latter has a food servery along one wall and tables laid out for dining, overlooked by a dartboard and pool table on a railed-off dais.

The decor is traditional, with a patterned carpet, banquette seating, worn varnished tabletops, and matching upright chairs. A large Bass-branded mirror hangs on one wall, and there's an upright piano towards the back.

DrHyde visited on a Thursday evening in July 2009. The four handpumps on the bar were all on, offering Greene King IPA, Greene King St Edmund's Ale, Shepherd Neame Kent Best, and Hardy and Hansons Olde Trip. There was also an interesting looking range of bottled beers and ciders. Although they do sell bottles of Magners, they refuse to let people drink it in the pub — it's for off-sales only! Service was quick and very friendly.

Kake visited on a Wednesday morning in May 2016 after a walk around the cemetery across the road. There were no other customers when I arrived shortly after 11am. '80s music was playing, not too loud. Service was taciturn but not unwelcoming.

They do food. On our May 2016 visit menus on the walls and behind the bar offered meals such as sausage and chips, bar snacks such as samosas and BBQ ribs, sandwiches, and a Sunday carvery. A large board on the pavement outside advertised cut-price OAP meals.

There is occasional live music. The pub also has a sideline running outside catering for events.

Accessibility: A small step to get in. Level access to the bar, all seating, and accessible toilet. The pool table and dartboard are on a dais, and there's a step to the other toilets.