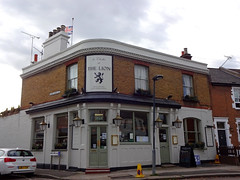 It was previously a locals' pub focusing on real ale (see older version of this page for an assessment as of February 2008), but in early 2011 it reopened as a combination of pub and French restaurant ("La Cloche At The Lion").

Entry is into a narrow space in front of the bar, with high stool seating around the edges and a sofa with paired armchairs to one side. Paintwork is in various shades of light grey. The interior is substantially larger than it initially looks, leading around the back of the bar to a couple of separate areas with mainly normal-height seating. Beyond this is a separate large restaurant area, with tables ready-laid with wine glasses and cutlery. Finally, there's a large paved garden out the back.

Kake and bob visited on a Tuesday afternoon in October 2018. There were two other customers when we arrived a little before 3pm. Mainstream pop was playing, not too loud but rather incongruously perky in relation to the atmosphere.

Accessibility: Two steps in at each entrance. There's a RADAR-locked accessible toilet on the level once you're in, and step-free access to almost all the seating including the restaurant area and garden (though there is a ridge at the garden threshold). There are steps to the other toilets.