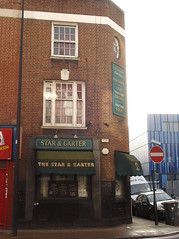 Ivorian restaurant at the Deptford end of New Cross Road.

Formed from the front bar of the Star & Garter pub, this small space seats only about 30 people.

Its past as a pub is still visible in the decor, with exposed floorboards and banquette seating. However, newer touches such as vases of (artificial) flowers on the tables make it clear that this is something different. Curtains at the windows block out some of the traffic noise from the busy New Cross Road, and make the place feel a bit more cosy.

Kake has visited twice now, both times on a weekday afternoon to get a takeaway. There were a couple of other people in on both my visits, and no music playing, but this YouTube video suggests it's rather livelier in the evenings. The menu is short, and rather low on details photo.

In December 2014 I went for the fufu (£6 including the accompanying stew); on asking, I found out that this came with a choice of lamb or fish, and I chose lamb photo.

The fufu was made from plantain, so had a subtle sweetness which went well with the rich spiciness of the stew. It was a little lumpy, and quite crumbly, making it hard to mould into pieces that would survive dipping into the stew; I haven't had plantain fufu before, though, so this might be normal. The stew itself had a strong flavour of palm oil, and was rich without being too greasy. The lamb was on the bone, and beautifully tender. I appreciated the inclusion of a vegetable in the stew (a small, spherical, peeled aubergine).

On a second visit in February 2015, I tried the placali (£6, again including stew) photo. Placali is a carbohydrate staple made from cassava flour; this rendition was smooth, stretchy, and delicious.

The lamb stew this time was different from my previous order, though it wasn't clear whether this was because the fufu and placali always come with different stews, or whether the stew is a different one every day. This one was rich, dark, and flavourful, with more of an umami gravy style than the palm oil flavour of the previous. The lamb was mostly off the bone and less tender, though this worked very well with the gravy, and there were a couple of nicely-softened tendoney bits to add interest.

It's worth noting that the opening hours do vary from those advertised, as it's a one-woman business, and the kitchen is some way away from the restaurant area itself, so the door may sometimes be locked until later in the afternoon/evening. It's probably best to call in advance and check when it will be open.

Accessibility: A step to get in. It's quite small inside, and filled with furniture. Toilets not checked.