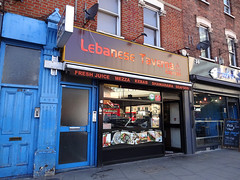 Kake used to buy falafel sandwiches from here all the time (when I lived down the road around 2003 or so) - they were generally pretty good, though quality could be variable; if you happened to turn up when they didn't have any falafel already cooked then you'd get them fresh-fried, otherwise you'd get some that had been sitting on the edge of the fryer, maybe microwaved before they went in your sandwich, maybe not. The fryer was only used for falafel, so there weren't any random inconsistent flavours, but it seemed at times that they weren't too careful at keeping the oil hot enough. doop also used to be quite keen on their baklava.

The food came within the time specified, but it didn't arrive very warm. The falafel sandwich (£4 for a large one) was nearly as I remembered it, though it was a bit dry; they didn't seem to have included the sauces that you can get on it if you order in person (garlic sauce, sesame sauce, chilli sauce) - if I ordered online again I'd ask for these in the "special requests" section.

Hummous with meat (£6 with option of lamb or chicken) was disappointing; although the hummous was fine, the lamb pieces were scrappy and fatty. Mixed grill (£10 including rice or chips) was fairly average; the chicken was dry and the chips wouldn't have been great even if they hadn't arrived cold, but the lamb was fine and the salady bits were interesting.

Overall: I'm not sure I'd order meat from here again, except perhaps the lamb from the mixed grill (which I think was a shish kebab), but the falafel sandwiches seem to have stood the test of time, and I'd also like to try some of their vegetable "side" dishes like labneh, moutabal, and okra, since I seem to remember them as being perfectly fine.

Getting here: Come out of the District/Piccadilly Line part of Hammersmith Station into the shopping centre, and follow the signs for the Fulham Palace Road exit. On coming out of the shopping centre (just past the Trout pub), turn left and go down the underpass; don't turn off to left or right but carry straight on until you find yourself coming up the steps at the other end. The Lebanese Taverna is just at the top of the steps, on the right.
Food last sampled by Kake and Richard, 24 October 2008.
OS X co-ord: 523416 OS Y co-ord: 178325 (Latitude: 51.489901 Longitude: -0.222156)
Last edited 2016-02-25 17:02:13 (version 3; diff). List all versions.