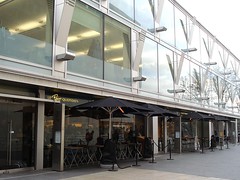 Smartish cafe on the South Bank near the Royal Festival Hall, part of a Belgian chain.

Kake and Bec visited on a Friday afternoon in January 2011.

The choice of teas wasn't huge — the options were breakfast, Earl Grey, fresh mint, and green — though the pot was a reasonable size for the £2.40 it cost. It would have been nice if they'd given us somewhere to put the used teabags, though.

With our tea, we shared an enormous scone with jam and cream (£3.60) photo. It was the type that's almost crunchy on the outside, and doughy within; Bec liked it, Kake was less keen. The portions of jam and cream were quite generous.

Service was OK. It's full table service, and we did find ourselves waiting for things like being brought menus, and paying the bill, but they were relatively busy; it's not as though the staff were standing around doing nothing. A 12.5% tip was auto-added to our bill.

Accessibility: No step to get in. Much of the seating, along with the toilets, is down a small flight of stairs; not sure if there's a lift.