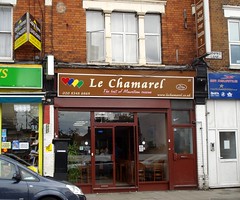 It's quite small, with around 24 seats. The food is mostly pre-prepared, displayed at the counter and then reheated in the microwave. It's mostly curry-type items though, which don't suffer too badly from this.

Kake and bob visited on a Sunday evening in August 2010. There were only a few other customers during our visit, but they said they're usually busier outside Ramadan. Probably for the same reason, they weren't offering the full menu, but there was a decent selection available.

We started with a selection of deep-fried things photo, taken from the counter and microwaved, so not as crisp as they could have been but tasty enough despite this. They were all slightly greasy but not overly so. They came with a reasonable enough coriander chutney (and we later discovered that they also do a hot-enough-for-bob green chilli chutney too).

The star item was probably the chicken samosas (60p each); the pastry was nothing special but the filling was perfectly textured and very nicely spiced. We liked these so much we got some more to take home with us. Other starters we tried included a couple of toroidal falafel-like things (these had fairly large chunks of green chilli in, so a few of the bites were a little challenging for Kake), a jackfruit fritter (hard to assess these as we'd not had jackfruit before), and a couple of small spheres made from arrowroot (slightly sweet and slightly sticky).

For mains, we shared three curries between us along with rice and roti — the portions were relatively small so this wasn't too much (note that the Chowhound thread linked below suggests that you can have half-portions if you ask). All three were slightly on the salty side, which would have been OK, but the rice (£1.50) was also salted; too much so for Kake's taste, though bob didn't mind it.

Vegetable curry (£3.90) photo was OK; not too greasy, but it wasn't very exciting, and there were (in Kake's opinion) far too many overcooked peas in it. Octopus curry (£6.90) photo was much better; the sauce actually tasted of octopus, and the octopus itself was nice and tender. The heat in this one was towards the top of Kake's tolerance level. Lamb daube (£6) photo was also good, less hot than the octopus curry, with very tender lamb.

They aren't licensed, but they do have a fair few interesting soft drinks, including Mauritian milkshakes (which we didn't try), Mauritian almond-flavoured lemonade (bright green but actually quite pleasant) photo, and Mauritian pear "cider" (non-alcoholic, and quite tasty).

Service was very friendly, and they insisted on giving us several extra bits and pieces from the starter cabinet to take home along with our takeaway samosas — we weren't sure if this was because they saw us taking photos and decided to be extra-nice to us, or simply because it was getting late and they had a lot of stuff left over.

Kake's verdict: Perfectly fine for what it is. I'd come back if I was in the area, though I'd avoid any curries with peas in. I'd like to try more of their seafood options, given how good our octopus curry was, and given the accolades for their prawn curry in the Chowhound thread below.