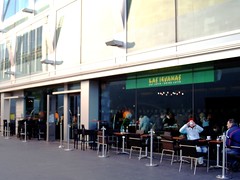 This chain restaurant is one of the many new business opened around 2007 alongside and under the refurbished Royal Festival Hall, near the Jubilee (Hungerford) foot bridges. It is housed under the railway arches which carry trains from Charing Cross to Waterloo East, and is thus split into several different spaces, which due to the architectural constraints are fairly dramatic.

When Ewan visited on a Sunday afternoon in February 2008, it was easily able to accommodate our group of five (unlike the restaurants under the Royal Festival Hall, alongside the Thames, which were all full). Service was attentive, and orders were taken promptly.

The menu (which can be found on the website) includes a tapas menu (there's a lunchtime offer on these, as well as a couple of tasting menus for either meat-eaters or vegetarians) and mains which are split into 'traditional' (fajitas, enchiladas, chimichangas and chili con carne), Brazilian and other 'regional' Latin dishes. Additionally, Las Iguanas advertises its own cachaca (a strong Brazilian spirit, somewhat related to rum) and has a number of varieties available.

My vegetarian chimichanga was none too greasy, and came surrounded by a tasty accompaniment of sour cream, guacamole and refried beans. It was filled with butternut squash, broccoli and cheese and was nicely filling. My dining companions were extremely pleased with their dishes, particularly the pato ensalada (duck salad), though the enchilada proved too much for my young cousin. The cassava chips I had on the side were chunky but fairly tasteless on their own (improved by the accompanying salsa dip).