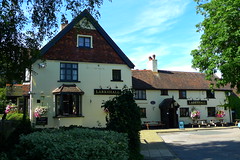 A large family-friendly pub in Chingford, owned by the Spirit Group.

The pub building is a converted farmhouse and has quite a bit of history, though it's only been operating as a pub since the 1980s. Therefore, unlike many pub conversions from the period, it has a certain amount of in-built character, featuring a number of different spaces on various levels, with low ceilings in places and some heavy-set old timbered beams. The entrance leads into to a rather dark room with a small bar, and another more secluded area of seating up some steps to the right. The main room is up some stairs to the left, passing a smaller bar on the way. There's also a large beer garden out the side, which includes a children's adventure playground.

On Ewan's Saturday afternoon visit in September 2012, the place seemed welcoming and friendly, with a number of families and groups in, mostly seated in the main bar. The other rooms were almost empty. Music was playing, but not too loudly. Service was friendly.

There are eight handpulls for ale (not all of them on), with London Pride, Bombardier, Black Sheep and Greene King IPA on offer.

Accessibility: There's a step to get in, and further steps up to the bar area, as well as steps to the gents toilets.