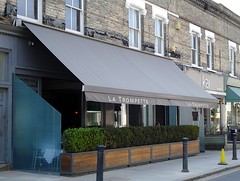 Pretty decent French restaurant in Chiswick. It got a Michelin star in 2008.

Kake and Bob visited for lunch on a Tuesday in May 2008. It was a lovely day so most of the other customers were sitting outside (they have a reasonable amount of seating out the front, under an awning) but we chose to sit inside. Bob remarked that it was the busiest he'd ever seen this place on a weekday lunchtime — and there was plenty of space — but according to the interweb you really need to book for dinner.

Kake started with "seared loin of tuna, green bean and caper vinaigrette, tapenade, sauce vierge, quails eggs" photo. This was very precisely cooked - the tuna really was just seared, and the quails eggs had runny yolks but perfectly crisp (yet rather bland) batter. Lovely light (but not insubstantial) flavours throughout the dish, and I'd happily eat this again. Next up was "braised leg of poulet noir with potato gnocchi, leek hearts, vin jaune and tarragon" photo. There was spinach too, and some mushrooms which I think might have been morels (they looked a bit like them, at least). Good quality chicken, cooked well; nice texture on the gnocchi, sauce a bit heavy/rich for the very hot day, but the weather's obviously not their fault. I was pleased that the portion of gnocchi was quite small, but this might not suit everyone.

This all came from the set lunch menu (I don't think there's an a la carte at lunch), which was £23.50 for three courses. There were six choices each of starters and mains, but only one vegetarian option on each course; potato and leek soup with wild garlic, morels and croutons for the starter and aubergine, chickpea and tomato ragout with artichokes, pine nuts, panisses and herb yoghurt for the main.

Kake asked for coffee instead of a dessert; they charged us the £3.50 that this was down as on the menu, but did give us a discount (not mentioned on the menu) on the three-course price. The coffee was perfectly fine, and the milk that came with it had been warmed. I suspect the rather steep price is because it came with a little dish of four chocolate truffles resting on what looked like a bed of cocoa nibs. I didn't want these and didn't eat them; it would have been a nice touch if they'd offered to let us take them with us, but they didn't.

We were on bottled water (£3.50/750ml) for most of the meal but after we refused a fourth (!) bottle, they did come around and top up our empty water glasses with a carafe of tap water (that tasted as though it had been sitting for a while - it had a rather more chemical flavour than Kake is used to in London water).

Service was fine, if a little slow-paced. They were fairly assiduous at topping up our water glasses and asking if we wanted yet another bottle of the stuff, but then it was a pretty hot day so they probably expected people to be thirsty. Perhaps worth keeping an eye on wine consumption rate in the evening, though.

According to their website, "La Trompette is owned by Nigel Platts-Martin and Bruce Poole, the partnership behind Chez Bruce in Wandsworth and The Glasshouse in Kew."

Kake's verdict: Will definitely come back - though this is partly because it's very close to Bob's workplace. Apparently the wine list is pretty good so we'll have to try it for dinner some time.