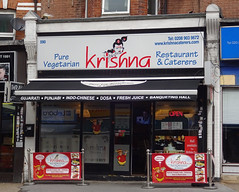 It's a small space, seating just 30 or so at white linen-covered tables flanked by tall-backed white pleather chairs. White tiles cover the floor. Relief from all this white comes in the form of a large mural across one wall, paintings of women in colourful saris on the wall opposite, and another mural on the ceiling showing sky, birds, clouds, and even a plane.

Kake visited on a Tuesday lunchtime in September 2017. There were no other customers when I arrived around 12:30pm, though one turned up about 20 minutes later. An Indian drama was playing on the flatscreen with the sound on.

Lunch fix thali (£6.50) photo was OK but nothing special. It included three curries (two lentil dishes plus paneer in a creamy sauce), a small bowl of rice, four small puri (deep-fried flatbreads) and a poppadom. The curries had fairly indistinct flavours, and none of them were particularly delicious. The poppadom and puri were freshly cooked, though, and the latter seemed to be wholemeal.

Kake's verdict: I probably wouldn't bother coming here again; the prices are quite high for the area and the quality's nothing special.

Accessibility: A step to get in. No further steps to the toilet (a single unisex cubicle).