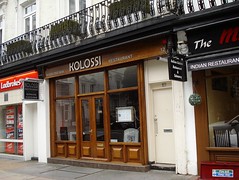 bob visited on a Thursday evening in November 2009. There were a few other customers already in and several came later.