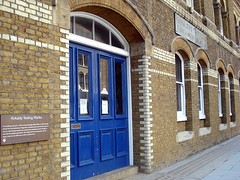 A tiny, eclectic museum in Southwark, devoted to the science of materials testing.

The premises were built in 1874 to house a giant hydraulic testing machine, designed by the proprietor, Mr David Kirkaldy. The machine formed the core of a family business that was handed down through three generations, before being sold off to a chemical company in the 1960s, and subsequently turned into a museum when a Professor of materials testing happened to be wandering past just before the scrap merchant arrived to clear the place out. Subsequently a considerable quantity of further equipment has been acquired, much of it from the Materials Testing Laboratory at Imperial College.

The museum now appears to be run by a small crowd of retired enthusiasts (of both genders) - elvum found that getting to meet the kind of people who devote their spare time to maintaining ancient scientific equipment was at least as interesting as the items on display, but YMMV. A guided tour takes about an hour, and there's enough history and unusual equipment to maintain the interest of anyone who's reasonably technically minded and sufficiently curious to make the effort to go there in the first place.

The museum is open on the first Sunday of every month, and during the annual London Open House weekend. Entrance and a tour is free, but donations are solicited (£3 per person is suggested). To get in, walk round to the back of the museum, on Price Street, and ring the doorbell. (The photo on this page shows the frontage on Southwark Street; the Price Street entrance looks like this.)