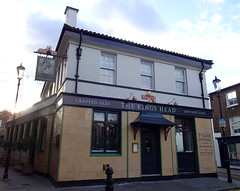 Tucked away at one end of the pedestrian-only Hogarth Alley (though there is vehicle access from Kenway Road), this corner pub is more spacious inside than is obvious from the exterior.

The floor and tables are predominantly wood, and the paintwork is shades of grey, blue and deep red. Seating is a mixture of banquettes and loose chairs, mostly of normal height, apart from an area of high tables and chairs located between the two Hogarth Alley entrances. A variety of styles of table and chair are represented.

A skylit alcove makes a feature at one end, centred on a fireplace. Square floor tiles of geometric design form a hearth, echoed by more of the same tiles in front of the bar.

There is an upstairs dining area with a similar number of tables as downstairs, and its own toilet facilities. This was closed on a Monday evening in January 2019.

There are five hand pumps serving various Fuller's beers, including a seasonal ale. There are also half a dozen taps offering a mixture of mainstream keg beers and ciders, and a chalkboard advertising "craft beers", presumably bottled. In January 2019, a pint of "Snow Globe" was £5.10.

elvum and a friend visited on a Monday evening in January 2019. There was approximately one customer per table at about 18:30. Service was fast and friendly. Music was either not present or not noticed. A man arrived to set up for a pub quiz at 8pm, at which point your reviewer beat a hasty retreat.

According to their website as of January 2019, food is served all day from 8am to 11pm (including Saturdays, and 8am to 10:30pm on Sundays, despite the advertised opening time of the pub being 9am on those days), with separate breakfast, lunch and dinner menus, plus a Sunday menu. It was not sampled on this occasion due to the aforementioned impending quiz.

elvum's verdict: This is a perfectly pleasant Fuller's pub. It is very convenient for Earl's Court station. I would happily visit it again.

Accessibility: A step at both the Hogarth Alley entrances. Once you're in, there's level access to the bar, seating, and toilets.

The pub was previously owned by Faucet Inns photo.