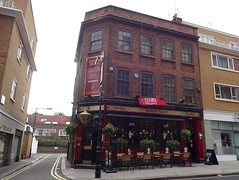 Bob has never thought much of the beer in here; pint of 6X in October 2007 was disgusting.

Kake decided to give it another chance in July 2009; first impressions were promising, with five real ales available on handpump (Thwaites Lancaster Bomber, Titanic Longitude, Adnams Broadside, Old Peculier, and London Pride). I had a half of Old Peculier (£1.56), which was sour and obviously off. To their credit, they had no problem giving me my money back.