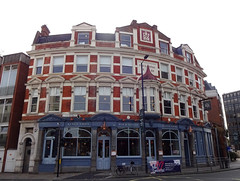 It's a large space, broken up by wide square pillars covered in glazed light and medium blue tiles. Decor is highly ornate, with patterned tiles on the floor, flower-patterned upholstery, 3D filigree hearts dangling against the walls, and a chandelier-style light fitting dripping with glass "crystals". Large windows at the front and a skylight at the back let in plenty of natural light.

Seating is a mix of high stools, freestanding chairs, and comfortably-padded banquettes. There's at least two large flatscreens. Double doors at the back give onto a small courtyard-style drinking patio with its own flatscreen, separated from the busy road alongside by a set of tall railings.

Kake and bob visited on a Tuesday morning in October 2018. We were the only customers when we arrived just after their opening time of 11am. Cricket was showing on the flatscreens with the sound off. Music was playing, not too loud.

In October 2018, Kake tried what was advertised as salt and pepper squid with wasabi mayonnaise (£7.50) but actually arrived as squid rings in batter with tartare sauce photo — no explanation or apology was given for this. The batter was thick, bland, and quite greasy, and the squid was chewy and flavourless — overall, quite a disappointment, especially given the price.

Child-friendliness: They have at least four highchairs, the type with no tray and very little back support. According to a sign seen in October 2018, they offer a "baby bottle warming service" and have a children's menu.

Accessibility: A large step to get in. There's a RADAR-locked accessible toilet on the level, with grab rails, alarm cord, low sink, and low hand dryer (though on our October 2018 visit the toilet seat was missing and there wasn't any loo roll). Other toilets are down a flight of stairs.