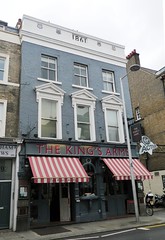 Geronimo Inns gastropub on Fulham Road in Chelsea, formerly branded as Young's (who own Geronimo Inns). Note that the comments below pre-date the change of branding, but this is still very much a food-led pub.

Inside, it ticks all the gastro boxes, with a hardwood floor, mismatched chairs, and a couple of armchairs and sofas photo. The tables aren't squeezed in too tightly, though; there's a reasonable amount of space in relation to the amount of seating.

Kake visited on a Wednesday afternoon in April 2009. The three handpumps offered two ales; Young's Bitter (£1.57/half) and Bombardier. Music was playing, though not too loudly. There were only about three other customers.