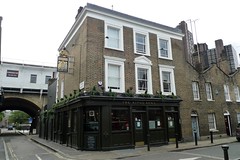 The front of the pub consists of two bars, linked by a passageway behind the bar itself. Both bars have an exit to the larger conservatory area at the back.

Gets very crowded, and is quite noisy; not just because of the piped music, which wouldn't be obtrusive on its own, but because of the crowdedness and people shouting to be heard. You may find "reserved" signs on the tables in the conservatory; as far as we could tell from talking to the staff, this doesn't mean "reserved for a specific group", but "reserved for people who're ordering food". See if you can grab the table with the sofa in the conservatory; it's probably the most pleasant area in the place (and right next to the ladies' loo, which is convenient. The gents' is situated in the passageway joining the two bars.)

Standard pub food is served in the front bars, but some very good Thai food (with table service) is available in the conservatory. Thai food served in pubs is a bit of a cliche now, but this is above average. Main courses are about £7–8. Kake tried the stirfried seafood in red curry sauce and found it excellent; the right balance of seafood to vegetables, and a good mix of seafood — mussels, king prawns, and some very tender squid. doop recommends the mixed starter platter — worth getting just for the fishcakes alone (prices as of April 2007).

Free wireless internet access is available (use DHCP, and join the NETGEAR network, not the Belkin one, as we mistakenly tried at first; Belkin is their neighbour's network!), but the signal is very weak, bordering on useless, at least in the conservatory.

Finding your way out of Waterloo Station can be confusing, so here are directions from Bob and Nick: Leave Waterloo station by the Jubilee Line Ticket Hall exit[0], turning left onto Waterloo Road. Walk up Waterloo Road for about 100 metres - you will pass under two bridges one atop the other (a grey plastic footbridge above a red iron ex-railway bridge), and then a railway bridge that crosses on the diagonal. Under this bridge there is a puffin crossing - cross and turn right onto Exton Street. Walk along Exton street (100 metres), which does a right-left stagger and becomes Roupell Street. The King's Arms is about 100 metres, on the right.

[0] If you're not familiar with Waterloo, the Jubilee Line Ticket Hall is at the south east end of the station, the opposite end from the Eurostar terminal, one level below the main line platforms. The easiest way to get there is to go onto the main concourse, walk along until you are opposite platform 4, and then turn your back to the trains. The escalator down to the ticket hall (and street level) is just to the right of blue painted wooden hoardings.

It's possibly easier to reach from Southwark Station; as you walk down Roupell Street, look for the greenery cascading down from the hanging baskets.