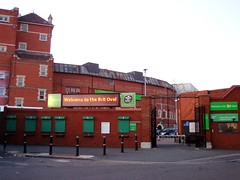 A cricket ground, with food and drink available inside. Previously known as the Brit Oval, it was renamed to the Kia Oval in January 2011.

secretlondon visited on a County Championship day and it was clear that it wasn't all open. The main food available were pies at £3.50. They sell four varieties - minced beef, chicken, steak & ale and leek and potato with cheese. When I bought mine they only had beef available photo, but I saw leek later. The food stall also sells hotdogs for £3, and sandwiches for £2.50. The pie was okay, but I'd suggest bring your own food. At bigger events such as Twenty20 matches there are other food options with at least one in situ Indian and several catering vans.

Beer at the Oval was draught - Fosters, Marston's Smooth and Scrumpy Jack cider, all for £3.30 a pint photo. There were also four types of wine available. The beer was sold in plastic cups with a pint line on. I saw a closed bottle bar too.

Prices in the Pavilion are cheaper for food and beer. Only members and their guests can enter the pavilion. The "Ali Brown 268 Bar" in the Pavilion has Marston's Pedigree on tap and does other drinks such as Pimm's (£5.50/pint). There is also a cafe and a restaurant in the Pavilion.

The Oval has an alcohol policy which bans bringing in your own for test matches, one-day internationals and Twenty20 matches. For other games you are allowed to bring in four cans per person, or a 750ml plastic bottle of wine. Plenty of people seem to bring in their own and with an unexciting choice of beer it's not really surprising.