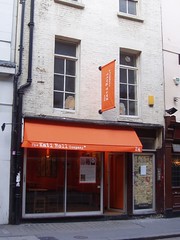 The menu is fairly short and focuses on the eponymous 'kati rolls', essentially a wrap made of paratha bread filled with curry. One can buy either one or two of each of the rolls, though one is probably enough unless you're really hungry. The paratha is crispy and slightly oily, and the filling spicy photo. Ewan tried a aloo masala roll (£2.75, or two for £5). They also have variants with paneer, lamb, beef, chicken or minced mutton (shami) kebab meat.

Comment added by Punit and Aradhita: We have been to Kati Roll recently (dec 2009), and we liked it. It is very similar to Kathi kebab rolls we have eaten in Pune, India, although slightly different sauce is used. Our personal favorite was the egg roll. Basic and tasty.