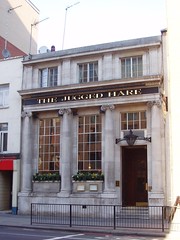 Fuller's Ale & Pie House in Pimlico. May have undergone refurbishment in November 2007, but we're not entirely certain of this.

The beer is very drinkable. (The manager was the 2006 Fuller's Master Cellarman of the Year.) Fuller's IPA was £2.95/pint as of April 2007. They also have the elusive Golden Pride on tap, on occasion, though never for very long.

Food is served all day. It's very good, with lots of tasty pies. You can have a pie tasting plate for £16.00 which lets you taste five of the pies on offer, though the pies are slightly wrong. Puff pastry top but with a shortcrust base. The desserts were tasty even if they had run out of custard.