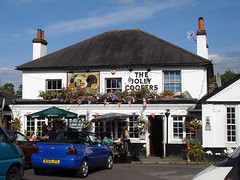 Pub in Epsom, situated in a residental area to the west of the town centre.

Inside, there are three drinking areas. Immediately ahead as you go in is a little snug bar. To the right is the sports bar, with tall stools at the bar, a dartboard, and all the usual keg fonts (according to the 2011 Good Beer Guide there's also a pool table, though we didn't spot this). Finally, to the left is what the GBG describes as a "lounge bar", though it's not really very loungy in decor; it's light and bright, if slightly cluttered-feeling, with two fishtanks, a hardwood floor, upright chairs and tables, and old pump clips all over the walls. This lounge bar is where the handpumps live; six of them in total photo.

There's some seating out the front, and a reasonably-sized garden out the back (including a barbecue station photo and some covered seating) that strikes just the right balance between cultivation and wildness photo 1, photo 2.

Kake visited on a Friday afternoon in August 2012. There were about half a dozen other customers in when I arrived around 3pm, all sitting out the front. No music was playing. The handpumps offered five real ales — Surrey Hills Greensand IPA, Hopback Taiphoon, Sambrooks Pumphouse (£1.60/half), Dark Star Festival, and Dark Star Hophead — plus Old Rosie cider. Service was very friendly and helpful.

According to the 2011 Good Beer Guide, dogs are welcome; and indeed on our August 2012 visit there was a very large dog present.

Kake's verdict: Worth the 15-20 minute walk from Epsom Station, at least in the summer. Possibly even worth coming to Epsom (which is outside the Travelcard zones) in the first place.

Accessibility: A step up and then down to get in. Step-free to bar, snug, lounge bar, and ladies' once you're in (not sure where the gents' is). Another step to get to the sports bar. Possibly also a step to get to the garden. The pub has a car park directly outside.