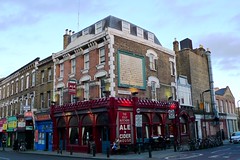 Kat and Rick visited in a Tuesday evening in April 2010, soon after the pub reopened after refurbishment/name change. The building is now definitely more welcoming than the venue's previous incarnation (which had a rather dim reputation), with large windows and doors propped wide open. The interior is one large room with only a few corners to hide in for a quiet pint — mostly the tables are arranged to suit diners. There were plenty of tables available at 7.30pm. Music was playing quietly in the background, and wasn't turned up when the pub got rather fuller and noisier after 8:30pm. On Ewan's Sunday afternoon visit, the place was very noisy; the bare walls and floors leave little possibility of any quiet at all.

The beer selection on offer was excellent on our visit — I counted nine handpumps including one for perry and another for cider. Ales included Redemption Urban Dusk, Brodies' Mild, and Thornbridge Jaipur Pale Ale, all well kept and interesting (on another visit by Ewan, there were at least three Thornbridge ales as well as two from Dark Star). There is a sign proudly proclaming 'FREE HOUSE' behind the bar photo. The lager selection (many continental, including Brugse Zot and Schlenkerla Rauchbier, and Meantime on tap; Brooklyn Lager, amongst others, in the fridge) is almost as appealing, although this confused one punter who complained to the bar staff that his pint 'wasn't bubbly enough'; the landlord patiently explained to him why this was the case.

The menu is on the more unusual side of gastropub fare, and features seasonal produce. Kat's tasty vegetable pie (£8) contained broad beans, peas and asparagus, though as a carbohydrate fan I thought it would have been improved with the addition of a few chips instead of the bread that accompanied it (pie fans will note that it was False Pie, i.e. the puff pastry floated on the top rather than encasing the contents). Rick's cassoulet was slightly more perplexing, very salty and lacking any beans (it had disappeared from the menu a few days later)! However the other options on the menu looked very appetising indeed — I would like to return and try one of the enormous burgers the group at the table next to us ordered. And work my way through each of those handpumps.