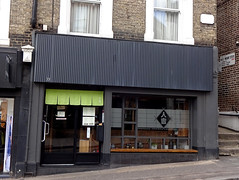 It's quite small, seating a couple of dozen people on the ground floor and another 16 in the basement, and it's very popular so it's a good idea to book. The ground floor is more popular, and features ten or so seats at a counter in front of the grill where all the kushiyaki is cooked. Although they also do sushi, this is prepared at a sushi station at the back of the basement dining room and there are no sushi counter seats.

Kake and Sarah have visited twice now, most recently in August 2014. Our first visit was on a Thursday evening in September 2009, in the company of Ewan and claud. We hadn't booked, and when we arrived around 7:45pm we were immediately consigned to the basement — it's likely that all the upstairs tables had been booked, since the place was packed on both floors by the time we left. We did book for our second visit, again on a Thursday evening (with Kat and Adam B), but again were seated in the basement.

The menu is extensive, and includes small plates, soups, sushi, sashimi, fried dishes, simmered dishes, and noodle dishes, as well as the kushiyaki they specialise in. On both our visits, we ordered a selection of things from different menu sections. It all arrived as and when it was ready, which worked fine given that we'd ordered a succession of small dishes which would never have all fitted onto the table at once. Speed of arrival was fine too, except on our first visit for the couple of extras we ordered towards the end of the evening when the place was full and the chefs were presumably working flat-out.

As expected, the kushiyaki was well-executed. In September 2009 we tried their "set B", which included more unusual items such as quail eggs and chicken gizzard photo, and also a couple of their vegetarian offerings, asparagus and shiitake mushrooms photo. In August 2014 we particularly enjoyed the ox tongue skewers, which had just the right amount of chewiness.

Other dishes were also good, though; in fact, everything we tried on either visit was good, and some things were outstanding. Nasu dengaku photo from Sep 2009 photo from Aug 2014 was meltingly tender on both our visits, and the miso topping was well-balanced rather than overwhelmingly sweet as it is in many other places. Agedashi tofu had a somewhat non-standard presentation on our first visit photo, though Ewan thought it was very good; it was more the regular style on our second visit photo and still good. Tempura vegetables photo from Sep 2009 were crisply fried, and not overly greasy.

Our final bill on our first visit was £40/head, but over a quarter of this was due to sake, of which we had a 720ml bottle plus two individual servings — the latter came in wooden boxes with a tiny pile of salt on one corner photo. We were more restrained with the booze on our second visit and ended up paying £35.60/head.

Accessibility: A step up to get in. Half of the seating is down a flight of stairs, and both ground floor and basement are quite cramped. Toilets are on the ground floor; can't remember if there were steps.