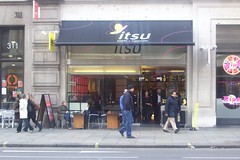 One of the 'shop' branches of the Itsu chain, which does takeaway sushi and other healthy-eating Japanese-style food, north of Oxford Circus Station on Regent Street.

This branch has seating, with four tables upstairs and another 10-15 mostly two-person tables downstairs, as well as a larger table seating eight which according to a plaque in the middle can be booked in advance.

The menu isn't particularly vegetarian-friendly, listing only a few salads and edamame beans (£2 for a large tub). These weren't particularly well-salted. Ewan had the spicy dumpling noodles (£4.75) which I suspect weren't strictly vegetarian though it wasn't clear from the emphasis on the vegetables (and I didn't want to ask). However, that was very tasty, though there were only about five dumplings on the top of the pot and below was all noodles and a miso soup.

They deliver to W1, parts of WC1, and parts of WC2, and you can order online via their website. Note though that they aren't open in the evenings.