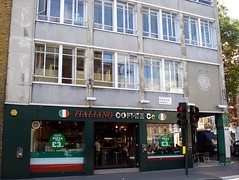 A fast food-style pizza place at the junction of Goodge Street and Charlotte Street in Fitzrovia. Despite the name, people come here for the pizzas not the coffee. The signage also refers to it as ICCo.

As of 2009, they advertise 11-inch pizzas from £3.50, which is for the margherita; the other pizzas are £4-£5.90. The coffee is from Illy. The ordering system is to queue up at the counter and pay for your pizza in advance, at which point you are given a gadget that vibrates when your pizza is ready. You then return to the counter and collect your pizza yourself.

There are some bar stool-type seats and some lower tables, as well as outdoor seating. It has a bit of a backpacker feel.

secretlondon visited one Wednesday afternoon in April 2009. I had a four cheese pizza for £4.50 photo and a large mocha for £1.90 photo. The large mocha was particularly small and unexciting. The pizza arrived quickly and was fine - crispy base and plenty of cheese. Ewan came back on another occasion and tried the funghi mushroom pizza (£4) which was also just the right side of bland, perfectly good fast food fare for the area.

There was some music playing and some paninis in a fridge. A sign on the fridge said that all sandwiches are half-price after 4pm.

Accessibility: One step to enter. There isn't a toilet.