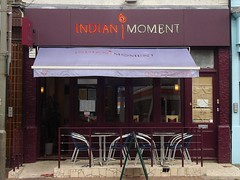 Bob and friends visited on a Saturday night in November 2008, and were lucky to get a table for four. The restaurant can probably seat about 35 in quite cramped conditions. There are two large pillars in the restaurant which really get in the way.

The poppadoms were light and tasty, and the chutneys to go with them were quite good too.

The menu is more interesting than your average Brit-Indian menu, but does have some of the old favourites as well. Bob had the wild duck breast (£10.25) which was cooked pink in a sauce of quite nicely flavoured spinach. This came with rice and some quite tasty bhindi bhajia. I also had a very good aubergine dish and a pleasant keema naan. I also had baby squid with chilli from the starter menu; it was a touch disappointing, with the squid being slightly overcooked. My companions seemed to enjoy their dishes too. My father's pasanda was quite tasty. The others had a lamb rogan josh and a chicken madras. The portions of rice were quite small. The total bill was £100 including four large cobras, a large bottle of water, and service.

Service was a little hectic, and they made mistakes with our drink orders, but the food order was fine. Although it did seem to take a while for the food to arrive, this can probaly be forgiven because they were full and several largeish groups had arrived at a similar time.