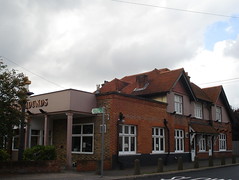 Ember Inns (Mitchells and Butlers) pub in the Corbets Tey area of Upminster.

As usual for an Ember Inn, the interior is divided into different areas with different ambience, including a light, bright area looking onto the beer garden, as well as darker, cosier spaces. Also as usual for an Ember Inn, the decor and feel are somewhat reminiscent of a hotel bar. The beer garden has picnic benches on grass, as well as a covered standing-only area for smokers.

Kake visited on a Friday lunchtime in September 2014. There were quite a few people in when I arrived around 11:45am, several of them looking at menus in preparation for the start of lunch service at noon. By noon, there were at least two dozen people in, and a half-hour wait for food (as the bar staff were taking pre orders). By 12:30pm it was very busy, and the car park was almost full. Music was playing very quietly, mostly drowned out by conversation.

There were four ales available on the eight handpumps: Adnams Broadside, Marstons Pedigree, Abbot Ale, and Brakspear Bitter. One of the other pumps had an Exmoor Ale clip turned to the side, possibly just run out or soon to come on. A pint of lime and soda was 50p.

According to the Ember Inns website as of September 2014, food is served all day until 10pm; according to a member of staff in the same month, food service starts at noon but you can put your order in before that. It comes from a chain-wide menu augmented by a sheet of specials photo.

In September 2014, Kake tried the beer-battered whiting and chips (£4.50 from the daytime set menu) photo. The batter was crisp, but unfortunately rather greasy, with a pool of oil accumulated beneath it on the plate. The fish itself was fine, moist and not overcooked. The peas were overcooked to my taste, though not enormously so. The chips were fairly standard frozen ones.

According to the Ember Inns website as of September 2014, there's a quiz every Wednesday from 9pm.

Accessibility: No steps to get in. The pub has its own car park. Toilets not checked.