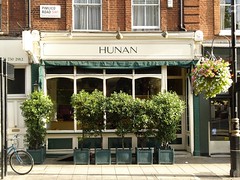 Despite the name, it doesn't actually serve Hunan food, but rather pan-Chinese food with a Taiwanese influence. The unusual thing about this place is that there are no menus; the owner figures out what you'll enjoy and sends it out to you, a few small dishes at a time (ten or more small courses wouldn't be unusual). His son is on hand to help you choose wine.

Their wine list is quite good, arriving in a book that makes it look a lot larger than it is, with a good spread of prices. Other than the usual range of soft drinks they also offer Tsing Tao beer.

The restaurant is split over two floors, with the upstairs consisting mainly of two larger tables that could accommodate up to 10 people and the downstairs smaller tables.

Billy visited in December 2009 as part of a party of 8, booked the night before. It was originally meant to be 7 but they happily catered for one more when we arrived. We received about 12-15 courses over 3 hours (I lost count early on), including lots of different starters, spicy beef, scallops, duck with pancakes, sea bass and lobster with noodles, as well as toffee banana and apple with ice cream for dessert. It was all good, although there were a couple of outstanding dishes (the lobster and beef definitely, as well as most of the starters, although the pork stuffed tofu stood out) as well as a couple that weren't that inspiring (especially the duck). Food was about £50 a head and while we did try every dish they had on that night we were also very full by the end.

Note that it's closed on Sundays, and the interweb suggests it's best to book. Interestingly, it was nominated for best vegetarian provision in an omnivorous establishment in the 2003 Vegetarian Society awards. We've also heard that they cater well for vegans.

Accessibility: The bathrooms are up a flight of stairs for the ladies' and down two flights for the men's.