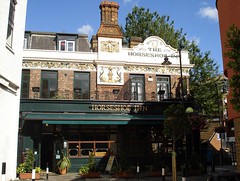 Small pub with real ale near Guy's Hospital and London Bridge Station. The decor inside is heavily focused on bare wood, and the interior is broken up by wooden screens with glass panes. There's a dartboard to the right of the bar.

We've visited several times now, most recently in June 2019. On a Sunday early evening in May 2009, there were just a couple of other customers in at 5pm. Music was playing, ranging from relatively quiet sort of Portishead-like when we arrived to louder and more bizarre later on. On another visit on a Friday early evening in November 2011, tables were at a premium (not helped by a large reserved area) but there was standing room at the bar, and a little hovering eventually gained us somewhere to sit.

On a Thursday afternoon in June 2019, there were quite a few people in around 4pm, and in addition a lot of the empty tables had signs on saying they were booked from 6pm. Bland pop music was playing, not too loud, and there was a pleasant buzz of conversation, again not too loud. By 5pm it had got a lot louder and busier, and by 6pm there were no free tables either inside or outside.

The real ales available in May 2009 were Brakspears Bitter, London Pride, and Davenport Bee-Zone (£1.60/half). Blackboards outside and behind the bar advertised other ales coming soon (Golden Hare, Everards Sundance, Hopback Crop Circle). In November 2011, the ales were Jennings Cumberland (£3.25/pint), Brakspear Bitter, and Brakspear Oxford Gold. In June 2019, they had three Brakspear ales: Oxford Gold, Jericho Pale, and Gravity. A pint of lime and soda was £1.80.

They used to do Mongolian food (see old version of this page for an assessment), but as of early 2014 this is no more. They now do pub food and pizzas.

Accessibility: Small step (more of a ridge) to get in. Step-free to the bar, at least some of the seating area, and the ladies' toilets, but didn't check the gents'. There's a accessible toilet on the level, but it's in the least accessible corner of the pub, past several tightly-packed tables.