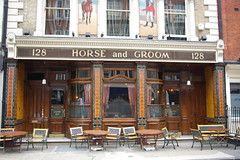 Even after work on a Friday evening this pub only slowly filled up (at 5pm we had most of the back of the pub to ourselves), and the upstairs bar remained largely quiet even later, so ideal for large gatherings. (This room can be booked for functions according to signage in the pub.)

There's no ale on handpumps, but just on taps, and the Old Brewery Bitter comes in at 93p/half.

There's a darts board as well as some boardgames kept behind the bar (rather flimsy versions of draughts, snakes & ladders, and ludo).