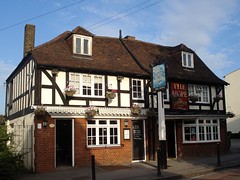 Good Beer Guide pub in Carshalton. The lease was purchased by a group of its regulars in early 2010, and the same group purchased the freehold in 2015.

There's a bar area at the front, with more seating further back, then a room with a bar billiards table, and finally a large beer garden out the back, some of which is sometimes covered by a marquee (in which beer festivals are held).

According to the 2011 Good Beer Guide it has a rotating range of ales with a mild and a real cider usually available. On Kake and bob's August 2011 visit, the ales were Horsham Best Bitter, Saltaire Cascadian Black, Green Jack Gone Fishing ESB, Windsor & Eton Knight Of The Garter, Moorhouse Premium Best Bitter, and Tring Lady Lemon's. They also had a couple of real ciders available.

According to a blackboard seen outside in August 2011, food is served noon-3pm; see photo of menu.

Accessibility: Can't remember about steps to get in. Two large steps to the beer garden.