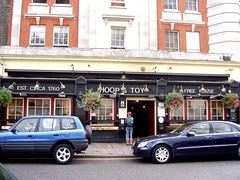 There's nothing particularly special about this pub just around the corner from South Kensington Station except that it's convenient to the station and shares certain characteristics of a traditional pub.

The food is fairly bland — in September 2007, Ewan's burger was in a floury bap with a rather meagre portion of chips. Worse, the atmosphere is a little soulless, which wasn't helped by the atrocious music selection.

On the plus side, they have a selection of regular ales (Pride, Broadside, Abbot Ale) and three guest ales. The Staropramen and Hoegaarden taps were marked as 'coming soon'. Plus there's a wine list which as of September 2007 ranged from c. £12-22.

Accessibility: A step to get in. There's a RADAR-locked accessible toilet on the ground floor. Other toilets are up a flight of stairs with a sturdy handrail all of the way up on one side and most of the way up on the other.

Last visited by Ewan, Kake, and other Tube Walkers, September 2013.