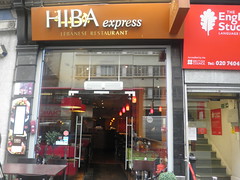 Lebanese restaurant in Holborn, very near Holborn Station. They also do takeaway and delivery, and offer online ordering via Just Eat.

bob has visited several times now, most recently in October 2013.

In March 2013, I arrived a little before 1pm and it was quite busy, though they did find me a table (near the door and a bit draughty). There was a queue for takeaway. I had "today's platter" (£11.25) of hommos, moutabal, tabbouleh, falafel and a skewer each of kofte and chicken shish. I also had some melon juice photo. It was all pretty good, so I decided to go back again the next month for a takeaway.

In April 2013, I arrived around noon and there was no queue; the food arrived very quickly too. My takeaway "lamb shawarma meal" (£5.45) photo consisted of a lamb shawarma wrap, chips, and a soft drink. The lamb shawarma was pretty good; they'd obviously used lamb steaks to build up the shawarma photo, there were interesting vegetables inside (pickles, tomato, and cabbage) and it came with tahini sauce. The chips were crispy on the outside but still a bit underdone in my opinion.

bob's verdict: I'd go back again.