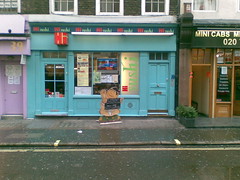 It offers all you can eat sushi for just under £15. For that, you get a choice of eight non-sushi starters (hot dishes, generally tempura, also miso soup) and then as many plates of sushi as you can eat within an hour and a half. Photo of one of the plates

The downstairs seating area is odd. You sit at sunken tables, which makes getting back out again quite tricky.

Bob notes that the grilled squid starter was quite tasty, while the sushi you can get on the all you can eat menu was slightly dull but good enough.

On Ewan's visit in April 2008, our group of seven got a plate of everything and then replenished it three times which was no trouble. Each plate comes with ginger and plenty of wasabi. There is a £5 charge for food wastage, which shouldn't be a problem with a large and hungry group (nor is the time limit). Miso soup was very tasty, and the tempura vegetables were great. Salmon skins got very favourable reviews, while the tofu was really very good indeed.