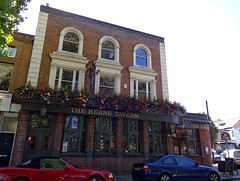 This pub alongside the southern end of Peckham Rye Common certainly does not lack space, with a large wood-panelled room for drinking, another for dining, and a vast outdoor beer garden/play area.

When Ewan visited in August 2007 they had Timothy Taylor Landlord, Black Sheep Bitter and London Pride on tap, with a rotating guest beer. Draught lagers were Staropramen, San Miguel and the other usual options. They also had Addlestone's cider on draught, and a reasonable wine list as well. When Kake visited in September 2018, the handpumps were clipped for Truman's Lazarus, St Austell Tribute, and Pilgrim Progress; and a pint of lime and soda was £1.60.

On Kake's Thursday afternoon in September 2018, there were three or four other customers when I arrived around 2:30pm, all out in the back garden. Music was playing, a little louder than ideal for conversation.

According to their website as of September 2018, food is served noon-9pm Tue-Sun (no food Mondays).

In August 2007, Ewan found the food to be excellent albeit pricey, with a range of dishes covering meat, fish, and vegetarian options (though there was only main catering for the latter). The bowl of chips provided only a small amount of thin-cut chips for £2.50.

In September 2018, Kake's breaded whitebait (£6 on the menu but only £5 on the till) photo was pretty good. There wasn't a single obvious bone, the breading stayed on and wasn't greasy, it was a generous portion, and the tartare sauce appeared to have been made in-house. The only real flaw was the accidental inclusion of several small bits of batter that had presumably remained in the fryer from an earlier order of fish and chips.

They have free WiFi, which as of September 2018 requires you to give several pieces of personal information but doesn't seem to require any of them to be true.

According to a notice seen outside in September 2018, there's a quiz every Sunday at 8pm.

Kake's verdict: I quite liked it here, though it's probably very different when full of children (I was there on a weekday before school chucking-out time). I wished the music had been a little quieter, too.

Ewan's verdict: It's aimed squarely at affluent East Dulwich residents and parents. Staff can at times be a bit pushy, when the demands of the parents require a bit of extra space.

Child-friendliness: According to a notice seen outside in September 2018, "supervised children" are welcome until 8pm. They have a small and somewhat uninteresting children's menu with just one vegetarian option. The ladies' has a pull-down nappy change plus a stash of nappy bags and a packet of wipes (gents' not checked).

Accessibility: A step to get in. It's step-free to the bar, seating, and ladies' once you're in, though the cubicles in the ladies' are a bit of a squeeze. There's a ridge at the threshold to the garden, at least an inch or so.