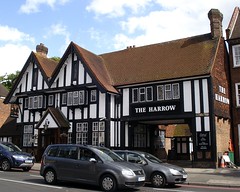 It was previously part of the Ember Inns chain (Mitchells & Butlers), but was acquired by the Stonegate Pub Company in October 2010 and is now part of their Great Traditional Pubs sub-brand. Although the name on the frontage is "The Harrow", both the Stonegate website and the pub's own website insist that it's actually called the Harrow Inn.

Prior to the takeover, it was pretty much exactly like all other Ember Inns, reminiscent of a hotel lobby or a Beefeater from the '80s, with seating provided by a mix of sofas, banquettes, and normal chairs and tables. The post-takeover layout is fairly similar, but the feel is different and somehow less corporate.

Kake and bob visited on a Saturday afternoon in June 2012. There were five real ales available — Dorking Brewery DB Dry Hop Gold, Wells Father's Day Ale, Hammerpot Woodcote Bitter, Hammerpot Madgwick Gold, and Sharp's Doom Bar — with a board on the wall indicating their dates of delivery, racking, tapping, and readiness photo. In contrast to our pre-takeover visit in October 2010 (on which the ales were served far too cold), the ales were served at an appropriate temperature.

There were quite a few people in, but plenty of spare tables. Music was playing, but not too loud, and a lot less "hotel lounge" than on our pre-takeover visit in October 2010.

Food is served, possibly all day. (Menu photos as of June 2012: 1, 2, 3, 4.) We tried a couple of things from their sharers section: the fisherman's plate sharer (£9) photo and the BBQ chicken wings (£4 for 10) photo, and both were quite disappointing. The fisherman's plate was missing the advertised calamari (no explanation was given for this), the "hand-battered haddock goujons" were overcooked and saturated with grease, and the "butterfly king prawns" were mostly breadcrumb. The least worst thing on the plate was the scampi, which were OK. The BBQ chicken wings were more bland than objectionable; the chicken itself was fairly flavourless and the BBQ sauce lacked depth and complexity, but at least the meat wasn't overcooked.

Prior to the Stonegate takeover there were two pub quizzes a week, on Sundays and Tuesdays from 9pm, but we don't know if this is still the case.

They offer free wireless via The Cloud; you have to give an email address and password to register, but there's no verification of the address and when Kake tried in June 2012 it happily accepted an address previously registered for Cloud wifi in a Wetherspoons.

Kake's verdict: In general, much improved from its Ember Inns incarnation. I'd happily come back for a pint or two, but I wouldn't risk the food again.

Accessibility: Two steps up to get in. Toilets are up a flight of stairs with a handrail on both sides (though on one side it doesn't go all the way up).