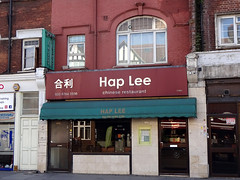 Chinese restaurant in Norbury. It also does takeaway and delivery, and has a buffet on Sundays.

It was initially a double-width shopfront comprising numbers 1585 and 1587 photo, but by March 2019 it had retrenched to number 1585 alone. Before this it sat around 60 people, with four of the tables large enough for groups of eight, but presumably it has less space now (we haven't visited since). The decor is pink, red, and cream photo.

bob visited on a Saturday lunchtime in December 2016. It wasn't obviously open when I arrived just before 1pm; they hadn't turned the sign around from "Closed" to "Open", and the lights were dimmed. They brought the lights up when I came in, and although I was the only customer at that point a couple of others turned up shortly after.

Prawn crackers were brought to the table, and I was given a fork and spoon; I wasn't asked if I wanted chopsticks, but when I asked for them they were brought along with a bowl and small plate.

Hot and sour soup (£3.50) photo was quite peppery but there wasn't much chilli hit. There was a decent meat content, consisting of prawns, chicken, and pork.

I also had aubergine in black bean sauce (£5.80) photo. The aubergines were very soft and watery, and the black bean sauce was also quite watery. It wasn't as gloopy as I would normally expect from Anglicised Cantonese food, and I wished it had been a bit closer to the norm in this respect.

A 10% service charge was added to the bill photo

bob's verdict: I wouldn't bother coming back; it was nothing special, and the only decent thing was the hot and sour soup.

Accessibility: The toilets are up a flight of stairs.