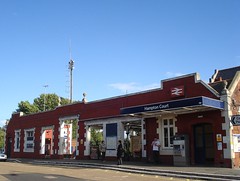 Zone 6 rail station in Surrey; although it's outside the boundaries of Greater London, it's within the Travelcard zones (possibly because it's the station for Hampton Court Palace, which is in the London Borough of Richmond).

Hampton Court Station is the terminus of a short (two-station) branch which splits off from the South Western Main Line to the west of Surbiton. (The other station on the branch is Thames Ditton.)