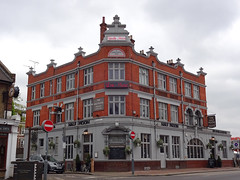 Pub in Putney. Following a renovation in September 2011, it is now part of the Geronimo brand.

According to the 2009 Good Beer Guide, this pub is "well known as a venue for live rock music"; there's live music every night, in a separate room at the rear, although the music is quite loud so bleeds out to the rest of the pub.

On bob's Thursday night visit in September 2008 there were quite a few people in, though our group of 10 were able to find a table in the furthest corner from the music. Young's Special was on, but it wasn't very good; in fact it was so bad that bob ended up leaving his.

Food is provided by the Lebanese restaurant across the road. There's no food on Mondays.

It has outside seating in a paved garden around the side, some of it covered.