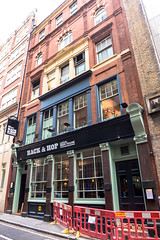 It was previously part of a small chain called Pubs of Distinction (also taking in the Dean Swift and the Old Red Cow), but according to the Dec 2019/Jan 2020 London Drinker it has now been taken over by the Portobello Pub Co. We haven't visited since the change of operator, so some or all of the below may be out of date.

Inside it's a high-roofed and open space, white walls and dark wood furnishings, though compact in size, with only a few tables downstairs facing the bar area. There's an upstairs room for dining with its own small bar (on which half of the kegged beers are available), which can also be booked for events.

The beer offering is the highlight at this compact pub, with 10 keg beer taps and four handpulls for ale, with regularly changing guests on each. The beers are sourced from a number of countries, though the cask selection focuses on regional breweries, with such names as Weird Beard (based in Hanwell), Windsor & Eton, and Titanic cropping up regularly. They also have a house pilsner brewed for them locally, and a large selection of bottles including a wide range from London brewers like Beavertown, Brew by Numbers and Pressure Drop.

The food offering covers a range of options and is given on the website. They also have sharing platters, with both the cheese board and the sausage board being excellent quality (and well-proportioned), while the more meat-based 'bar snack platter' offers their scotch eggs (with a runny yolk), Welsh rarebit, blue cheese beignets and tasty padron peppers. According to their website as of March 2019, food is served noon-9:30pm Monday to Friday and noon-6pm on Sunday.

Ewan's verdict: Having only visited on a weekend, when the atmosphere is likely to have been significantly more relaxed, I really liked this pub. The beer selection was varied and extensive enough that I was never short of something new to drink, and the food and service were both excellent. They also offered a very competitive rate for booking out the upstairs room for a party.

Accessibility: Toilets are up a flight of stairs.