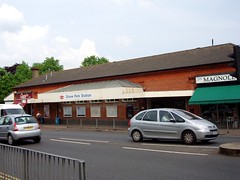 Zone 4 rail station in South London, forming the junction of the Bromley North branch with the South Eastern Main Line.

Although arguably the principal intermediate station between London Bridge and Orpington, this is not reflected in the off peak frequency of two trains an hour, less than most nearby stations. However, during train drivers' strikes Grove Park has often been the only station around with a service, the strike special service typically being Orpington/Grove Park/London Bridge only until 6pm.

There is step-free access to platforms 2-5 (the mainline platforms), but platform 1 (the Bromley North branch platform) can only be accessed via steps. There are bike racks on plaforms 2 & 3.

There is a Barclay's bank cash machine outside.