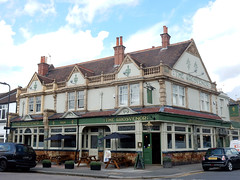 Entry is into a room wrapped around the bar, and seating stretches back quite some way from here.

A door-shaped gap in a wooden partition — presumably once an actual door — leads off to a side room entitled "The Snug" (though rather larger than one would expect of a traditional snug) photo. This has a small curve of the bar, plus banquette, armchair, and regular chair-and-table seating. The tables have wrought-iron bases, wooden panelling reaches three-quarters of the way up the walls, and stained-glass leaded windows are here and there. A mirror hangs over an old-fashioned fireplace, with a standard lamp next to it.

Kake and bob visited on a Saturday lunchtime in August 2015. There were only a couple of other people in when we arrived at noon, and it remained quiet for the hour we were there. Music was playing, not too loud.

According to their website as of August 2015, food is served noon-3pm and 6pm-10pm Mon, noon-3pm and 5pm-10pm Tue-Fri, noon-4pm and 5pm-10pm Sat, and noon-9pm Sun, though according to a menu in the same month they also do brunch 9:30am-11:30pm on Saturdays, and a staff member told us that because of this, lunch on Saturdays actually starts at 12:30pm. There is table service available for food and drinks. Vegetarian and gluten-free items are clearly marked on the menu (though the former are very sparse).

Kake had the pan-fried seabass with new potatoes, samphire, confit fennel, and salsa verde (£14.50) photo. This was very well executed. The seabass had a nicely crisped skin and the flesh wasn't overcooked (there was one bone left in, but this is a minor quibble). The samphire was slightly woody, but this is hard to avoid with samphire, and despite the intrinsic saltiness of this vegetable, overall the dish was very balanced in terms of salt. The confit fennel was very soft.

Child-friendliness: On the day we visited, they were having a children's fun afternoon (though we missed this as it didn't start until after we left). There's nappy change facilities in the accessible toilet. They have a children's menu.

Accessibility: A step to get in. Once you're in, it's step-free to the toilets, including an accessible one.