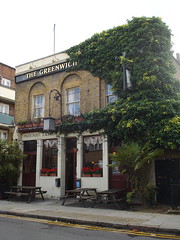 Locals' pub in Poplar. According to the Dec 2016/Jan 2017 London Drinker, it closed for a while at some point, but according to diamond geezer as of March 2018 it's open again. We haven't visited since the reopening, so some of the details below may be out of date.

It's a small, single-room pub with fairly sparse amounts of seating, though this does include a couple of sofas at right angles around a coffee table. A pool table stands to one side, a dart board is mounted on one wall, and there's also a fruit machine. Somewhat incongruously, a model shark head emerges from the wall behind the bar.

Kake visited on a Wednesday early evening in June 2014. Although there's a handpump on the bar, according to the member of staff on duty they never have anything on it; the closest thing they have to real ale is keg Ruddles Best. Instead I had a pint of Stowford Press cider (£3.30).

There was no music playing; instead, one of the two flatscreens was showing a quiz show with the sound on. There were no other customers when I arrived around 5:45pm, though one did turn up about quarter of an hour later. Service was friendly and welcoming.

Accessibility: No step to get in, but the door is quite narrow. Much of the seating is on high stools, though there are some normal-height tables. A step to the ladies' toilet (gents' not checked).