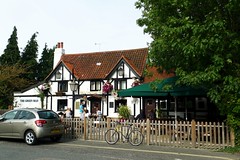 A pub just outside Heathrow Airport, near Hatton Cross Station, and convenient for Terminal 4 if you're driving and want a quick pint and some food before checking in. It's right under the flight path to one of the runways, so planes fly low overhead on a regular basis.

Parts of this pub are very old, dating back to the 17th century, and indeed there's a very low timber-beamed ceiling inside. It's a charming old world survival in an area otherwise dominated by industrial units for the services supporting Heathrow Airport. It overlooks what one imagines might once have been a village green. There's seating out the front in a paved area, and there's also a very large grassy garden area to the side with plenty of tables.

There are three handpulls on the bar, which offered Black Sheep Bitter and two other regulars on Ewan's visit in September 2011. The Black Sheep seemed perfectly fine.

On bob's visit, the Guinness was passable; the real ale wasn't that good but I think we caught the end of a barrel. The food was carvery style and was edible. The lamb was overdone to my tastes but wasn't bad.