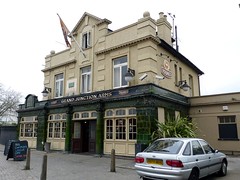 Young's pub on the canal in Harlesden.

The front of the pub is quite small but there's a large area at the back past the toilets photo, down some steps, and another along the side where the entrance from the car park is located. It also has a really large beer garden, which mostly overlooks the canal, and a canalside patio. There are even a few tables right down along the canal towpath.

It has nine handpulls for ale, with three on each side of the large central bar. Young's ordinary (£1.30/half) and Wells' Bombardier are offered, as well as Deuchars IPA (£1.35/half) on an April 2009 visit. Other standard draught lagers are available, including Staropramen, Amstel and Heineken. According to an anonymous commenter (November 2009), they have a happy hour 5pm-6pm on weekdays where all draught drinks are £2.50/pint.

The pub has three pool tables. It was very quiet at 4pm on a Thursday afternoon, but no doubt gets busier on a sunny weekend.