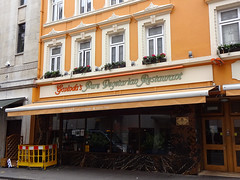 A 100% vegetarian restaurant in Soho run by the Hare Krishnas who have their temple next door. The food contains no garlic, onions, or mushrooms. There are also vegan options. You queue up at a hot counter and your food is dished up out of large serving containers, cafeteria style.

The food is offered to Krishna before being served which makes it 'prasadam' in their eyes. Distributing this food is part of their religion as they believe eating it makes the world a better place.

secretlondon visited on a Saturday evening in May 2009. I had a large thali (£8.50) photo and a bottle of fizzy sarsaparilla (£1.75?). There was also tap water on the counter. The thali wasn't spicy and consisted of rice, salad, dhal, and three other dishes. There were also poppadoms on the counter to take. They say it is eat as much as you want, but it isn't a buffet; I presume you can rejoin the queue and go for seconds. The bean dish was nice and the salad contained asparagus. They obviously don't have any alcohol but also don't have any caffeine. Decaffeinated coffee is available, and herbal teas.

I think there were also tables outside.

Accessibility: The toilets are down some stairs.